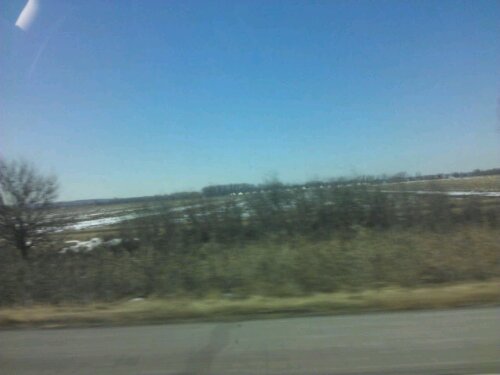 We’re on the road again, crawling across the floor of what my poet friend Nathan Bartel fondly calls “the inland ocean.” 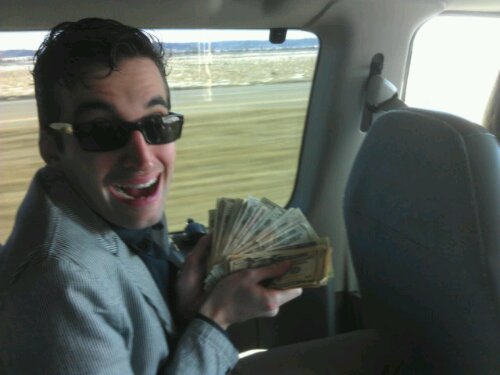 TM Jeremy Lemos uses the time to recount last night’s merch money. It looks like a lot, but even sharing rooms and compacting everything into a van and a passenger vehicle, tour is expensive, and the profit margins are, well, marginal. Many venues take 20% of merch sales, and part of every ticket sold has to pay the promoter and sometimes, depending on the arrangement, house staff, stagehands, monitor and FOH engineers, and cover hundreds in gas, hotels, food, per diems, and crew salary, before the band sees any profit left from all those expenses. 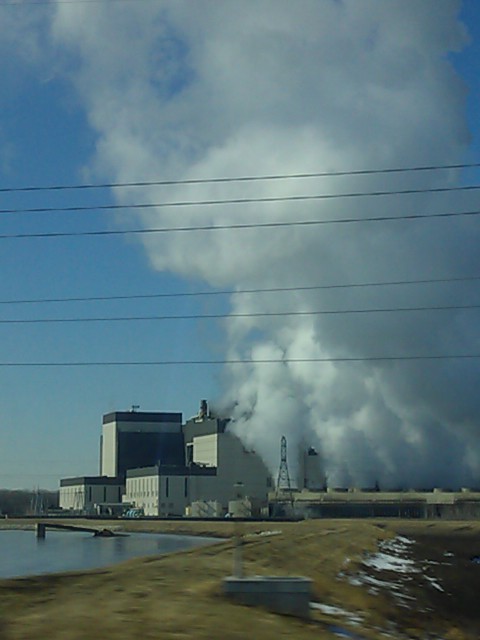 We’re driving through MO, and taking in slices of the local culture, including combative bathroom graffiti, highway smoke houses, and boiled peanuts. 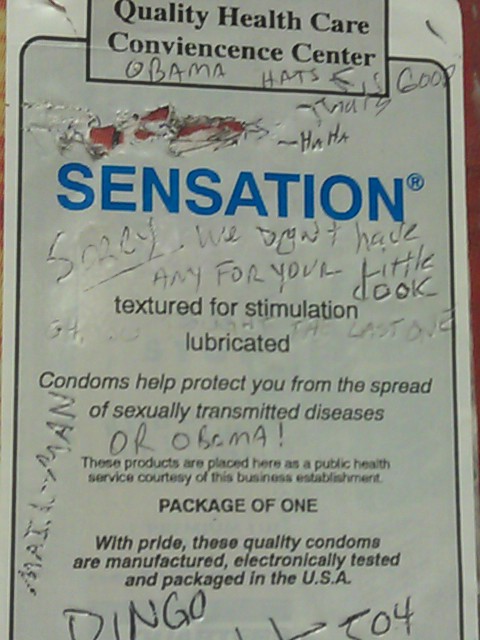 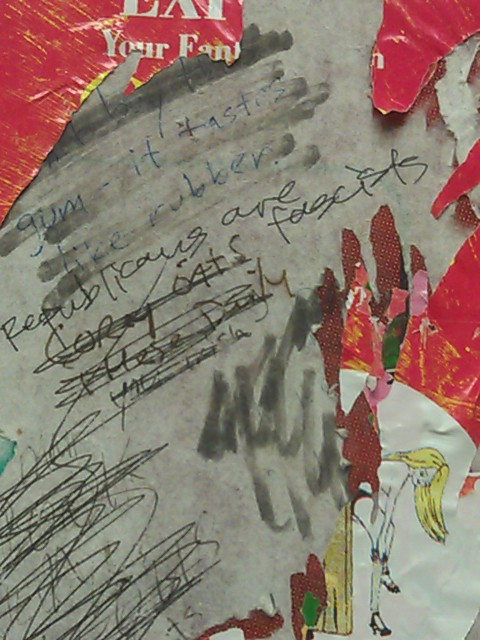 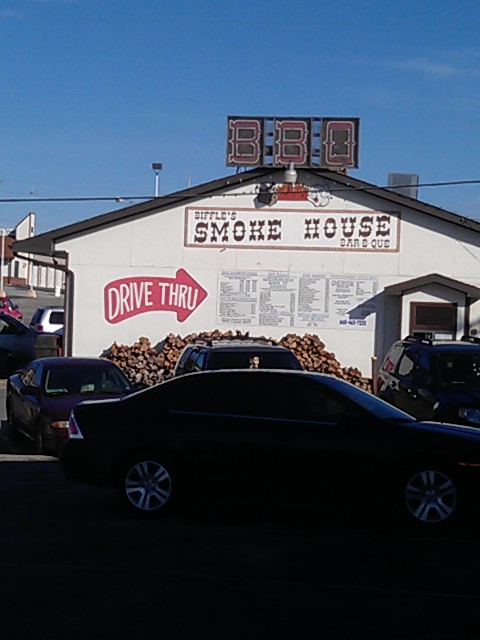 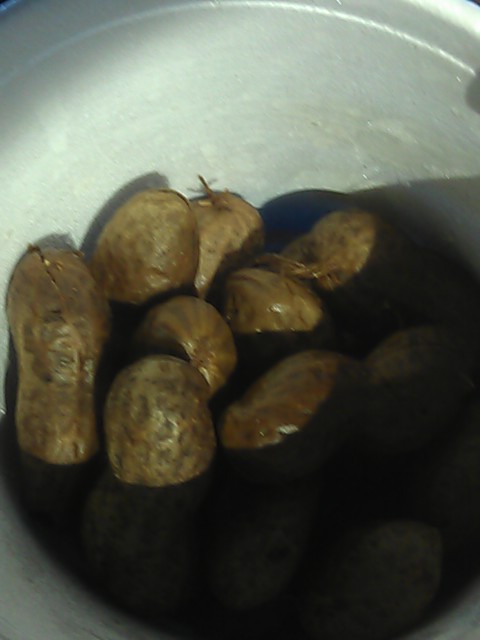 The long drives give us plenty of time to talk, tell stories, debate and share music. Jeremy should be sponsored by Apple–he has an app for everything from finding food on upcoming exits to sending letterpressed post cards, and has me wanting an iPad for its ability to act as virtual turn table, soft Synth, drum machine, or control a mixing board by remote. 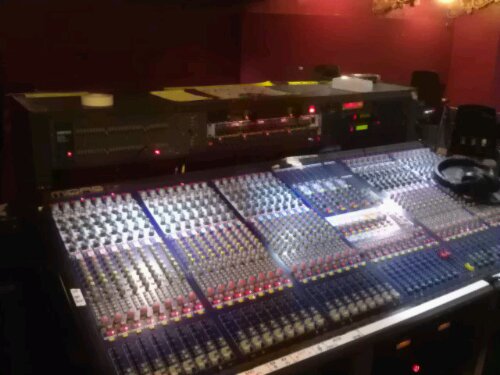 We get into the Blue Note to find it’s undergone some nice improvements–cleaned up green rooms and improved sound & lighting, including a Midas FOH board and LEDs in place of the old, hot stage lights. 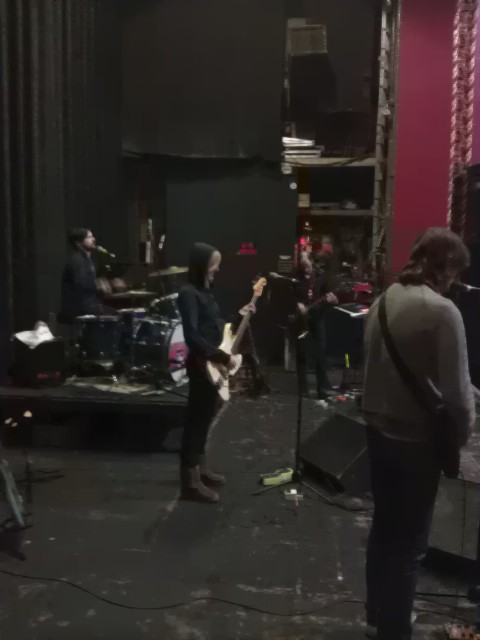 The band comes out for sound check in good spirits. They’ve been working on adding a couple new tunes to the repertoire, and even with only a few takes under their belts, they’re probably show-ready. 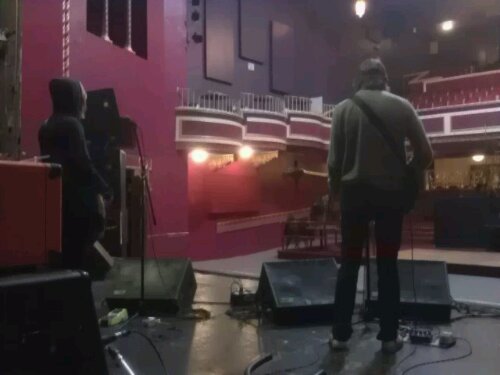 Stephen’s rig really sounds nice in no small part due to the well broken-in 25 watt Celestions in his basket weave Marshall cab. I don’t often get to see the band from the front. Here’s the audience perspective. While I’m listening to the front of house mix, Joanna notices something cutting out. These frayed cables are the culprit. Apparently this is the factory wiring; both the hot and ground lead are too long, with inadequate strain relief. Inevitably they’re going to short out after repeated flexing. Buy American. (or German, or… Quality not quantity.) 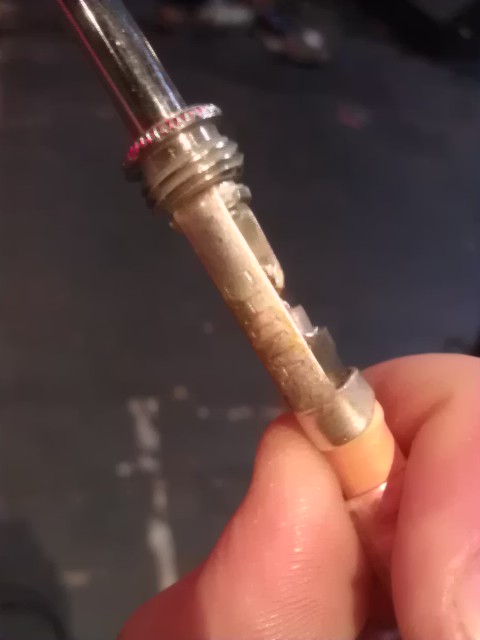 With cleaned up solder joints this cord will stand up better to the abuse of touring, even though the sound quality could be upgraded with Analysis Plus or Chord cable. The band wraps up and I strike the stage, then we go as a group for Thai. It’s prom night so we wait a minute amidst awkwardly dolled-up midwestern kids.Despite a huge rush, the food is great and we get back to the club to watch Nurses deliver another set of sultry, sexy Indie pop. As the band prepares downstairs I watch from the side of the stage. The audiences seem chill and respectful but I still sometimes get nervous when there’s no visible security up front. After the show, pedals at the downstage edge are the first thing I pull out of reach, then guitars that could be knocked over by crew onstage, and then cables.

Soon the band comes out and plays another great set that goes off without a hitch. Despite Joanna having a hard time with a rough monitor mix and Jake continuing to fight a cold, the rhythm section is in a good groove, and Stephen & Mike are their usual inventive and fluid selves.

The encore displays one of the band’s greatest and perhaps most overlooked qualities, which is their combination of playfulness and improvisation. You wouldn’t know it because of how seamlessly they stay on the same page, but quite often Stephen takes sudden, unscripted turns and the rest of the group locks in without batting an eyelash. Tonight that takes the form of the encore evolving into an all out jam session/rock medley, with Malkmus riffing off one of his own melodic lines and interposing it with mutated chunks of Zeppelin, Sabbath, Nirvana, the Troggs, and Jane’s Addiction. The whole thing feels like riding a rollercoaster in the dark, where you’re never sure what to brace for, the band cracking each other up even as they push each other to latch onto new riffs and collage them into a lurching, teeming, one-time-only new experience. It’s awesome to watch a group like this in the throes of distortion-laced telepathy.

Just as randomly as they took off, when the moment feels right they all glide in for a landing. I pick up the pieces and we head back to the hotel where there are suspicious looking homemade cookies waiting in the rooms. Jeremy and I share a little bourbon and reflect on the tour so far, feeling pretty good overall. It’s hard not to when the shows are as fun as this one. Next up, Lawrence.