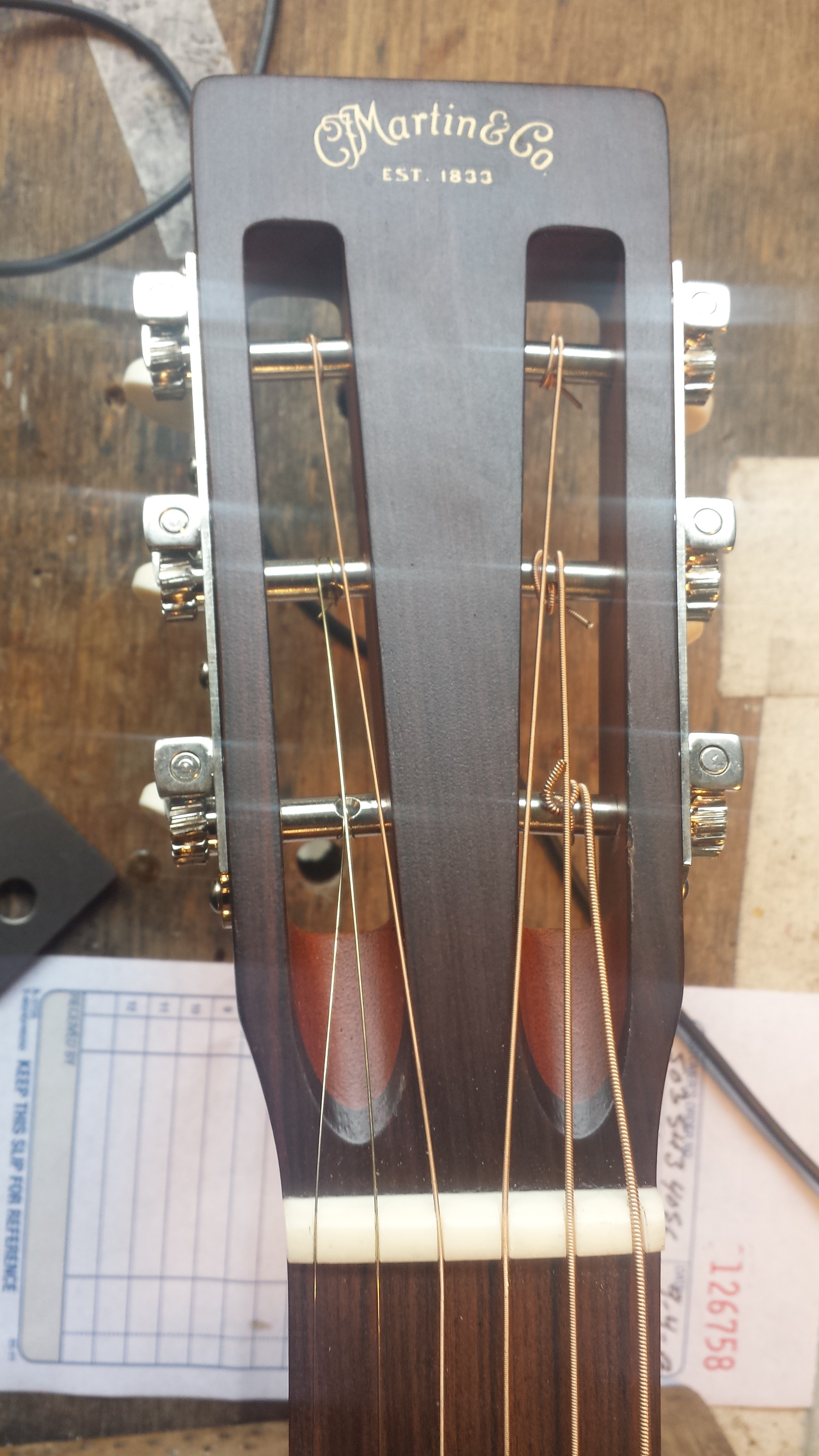 Even very nice guitars, brand new from the factory, can need some tweaks and adjustments. Unless you’ve worked directly with your luthier on a custom-made guitar where everything is to your preferences, most factory setups are a one-size-fits-all middle ground. By the time the guitar travels from wherever it was made to your climate, the neck may have shifted, or the body taken on or lost moisture, and adjustments to the action can be in order. This beautiful lefty Martin had action a little on the high side. More importantly, there were some barely perceptible buzzes coming from a few frets and strings, but also some kind of sympathetic buzz coming from the tuners. Some people might not notice them, but those kinds of little rattles can be the most annoying to players when the guitar is miked in the studio and they really come out through headphones. They can also be among the toughest to track down.

With sympathetic buzzes, something on the guitar is rattling, but it’s different than a buzz you might get from a nut slot that’s too low, or a dinged fret. They can sound alike, but if you know that your frets, nut, and saddle are in good condition, or the buzzes come out only when particular frequencies are played, it’s often another piece of hardware that comes alive at those certain resonant frequencies. Every part of the guitar transmits and absorbs energy from the strummed strings, and if there’s just a little too much slop in a machined part, when you hit the right note it will start vibrating away. How rude! Often the problem is a loose bridge saddle or saddle height screw on an electric, a loose pickup or preamp wire on an amplified acoustic, or a loose knob, strap button, or set screw. If you can determine what area the buzz is coming from, you can often isolate it by pressing on various parts of the guitar to see if the buzz stops when the right spot is muted. You’ll almost never be able to see the part that’s rattling with the naked eye.

In this case, there was just the tiniest amount of slack in the buttons on the end of the tuner posts. You’d never notice it while turning the tuning pegs, but that tiny amount of wiggle was just enough to show up and create that annoying buzz on the string attack. A tiny bit of water thin CA glue wicked into the gap was enough to knock it off. While I was inspecting the guitar, I saw something else that I wasn’t very fond of. 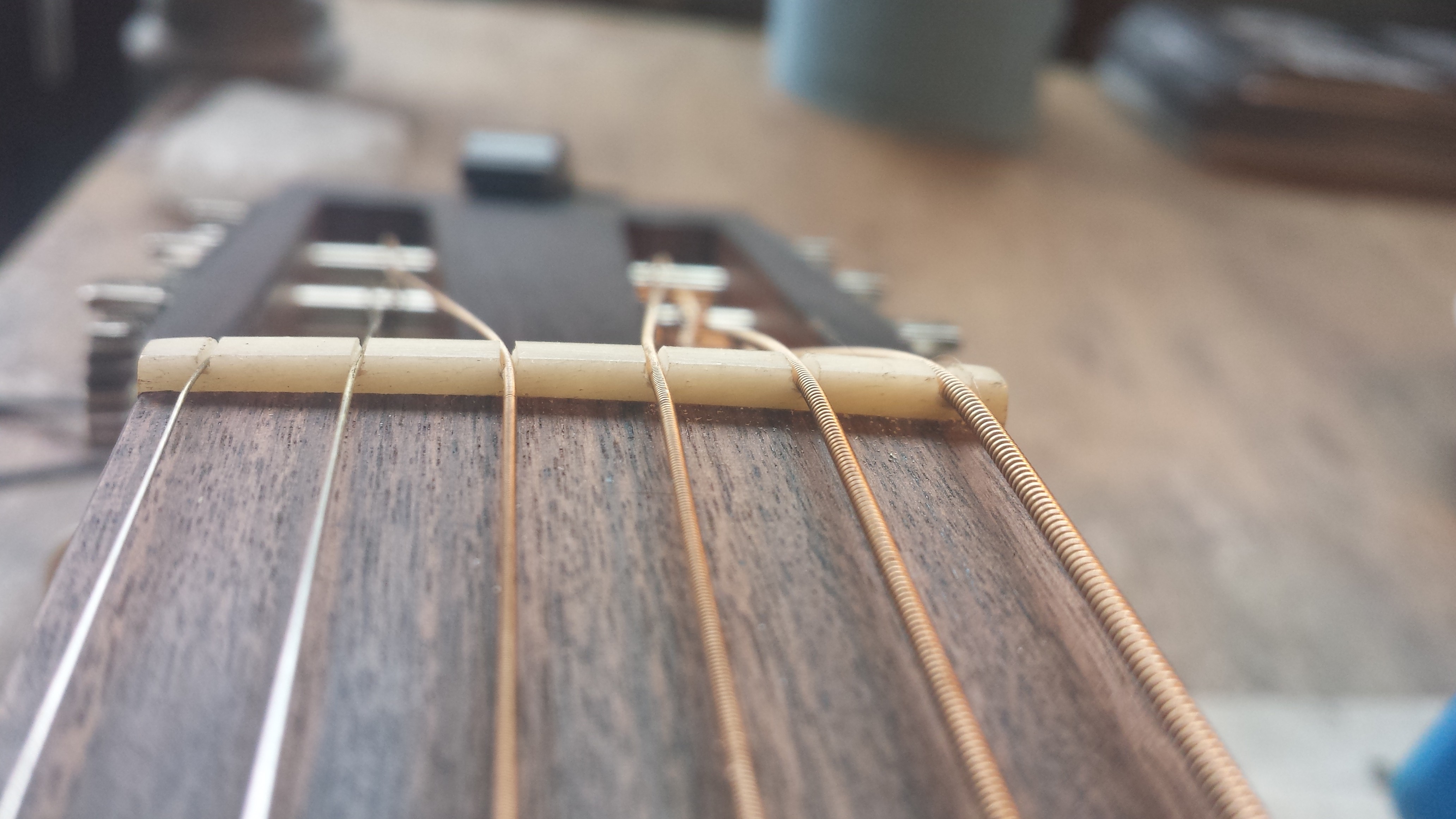 To me, these strings are buried a bit too deep in the factory nut slots. Slots too deep can cause the string to bind while you play instead of stretching and then returning to place, and that can lead to the common problem of the guitar going out of tune too often during a song. I file down, smooth out, re-profile, and polish the nut whenever I see this (i.e. on almost every factory nut– although new Gibsons sometimes have the opposite problem of bordering on too shallow.) 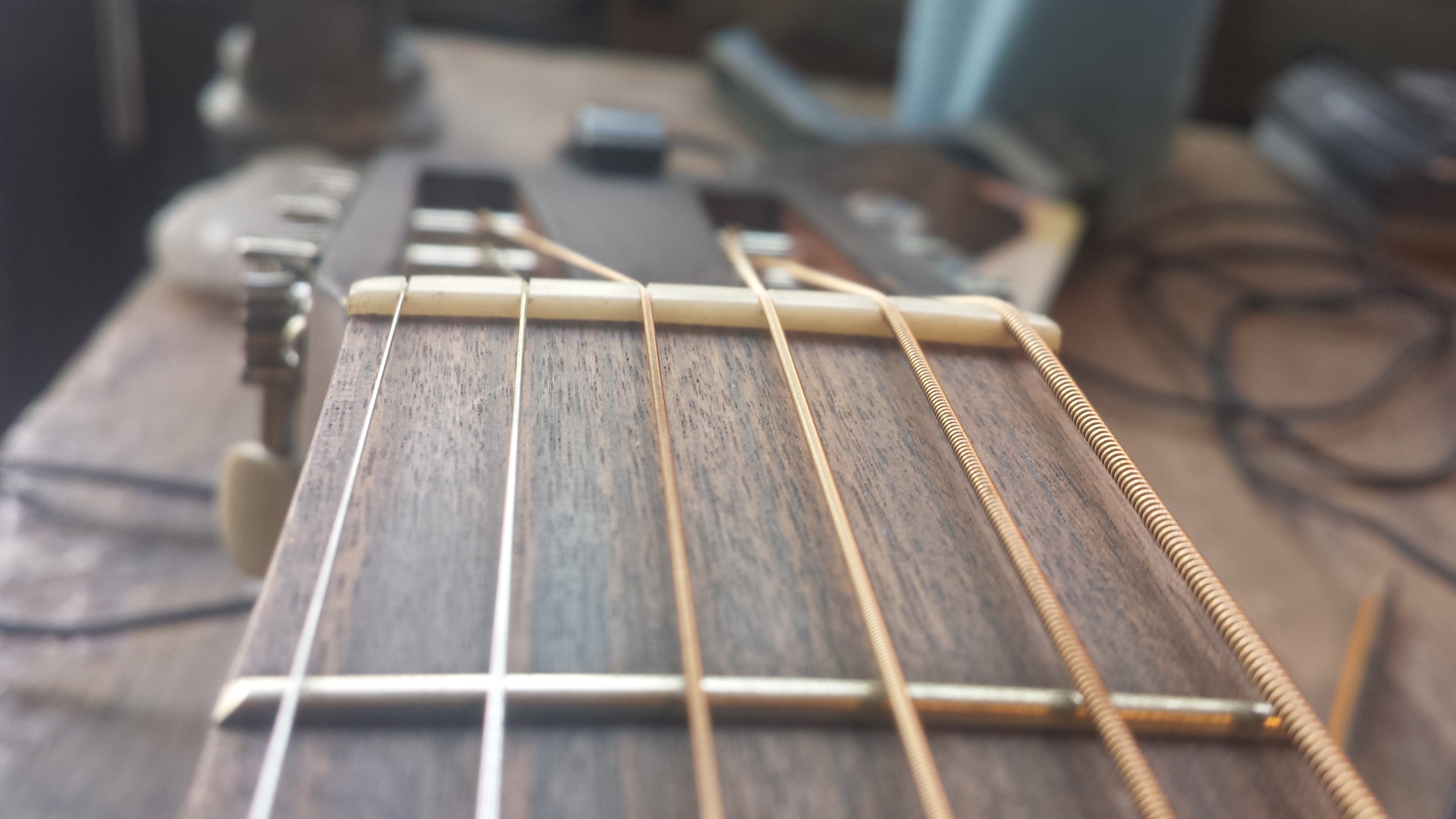 The change doesn’t have to be radical, just enough to expose the tops of the wound strings. The slot bottoms are burnished and checked for fit, which help the strings slide as needed. Over time, tuning the strings saws the slots deeper, pinching the strings and eventually cutting too close to the first fret, at which point the nut will have to be replaced. Bone wears longer and sounds better than many other materials. After I file the top of the nut and clean up the slots, I shape and polish the nut and smooth out any sharp edges. 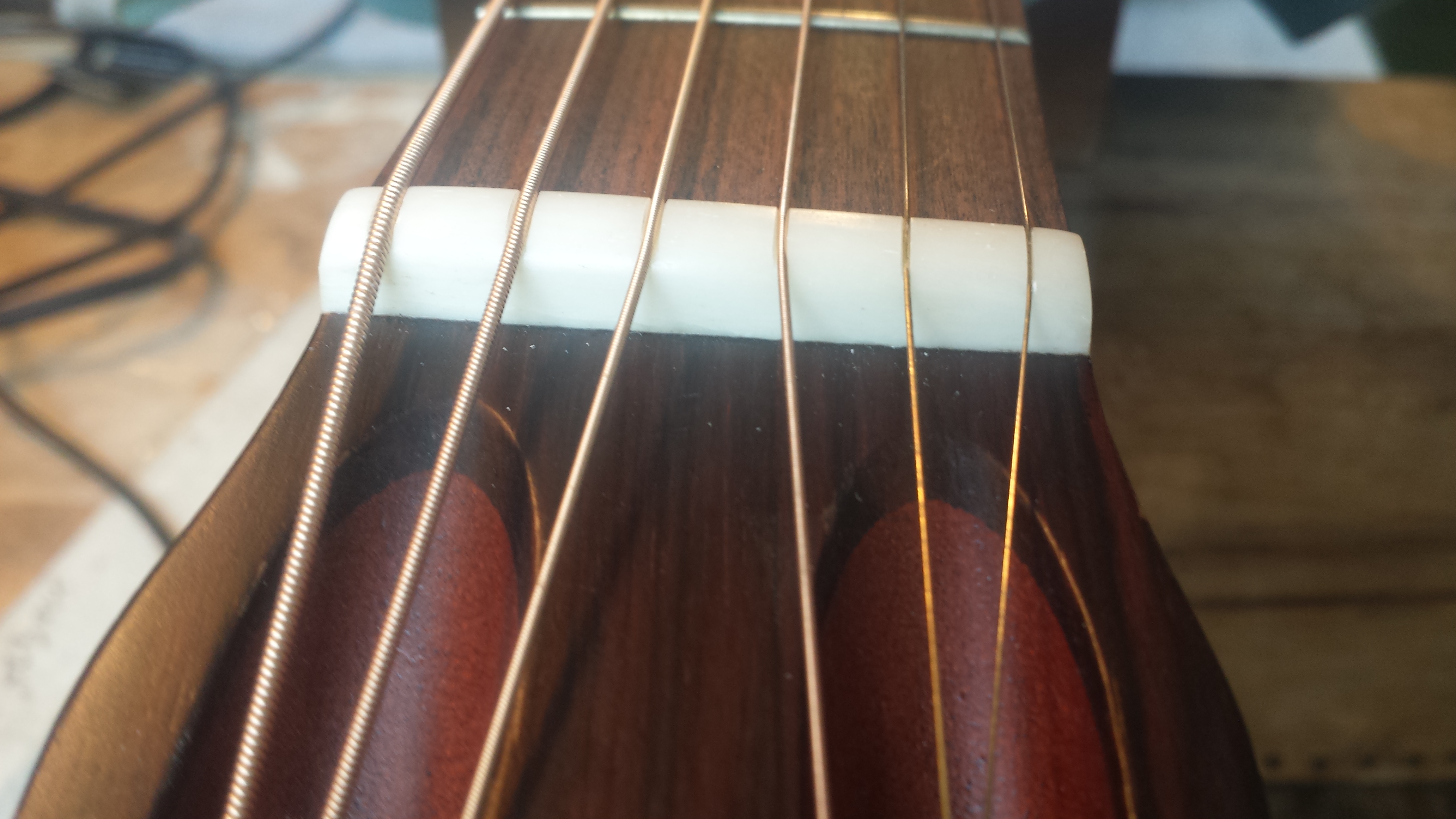 To correct the slightly high action, I carefully file down the bottom of the bridge saddle, and adjust the neck. Many acoustics require higher action than their electric counterparts, especially if they need to hold up to hard strumming without buzzing. A controlled amount of neck relief can help things play nicely, but I personally like the least amount of relief I can get away with. To me the guitar feels tighter and more responsive with less curve in the neck. 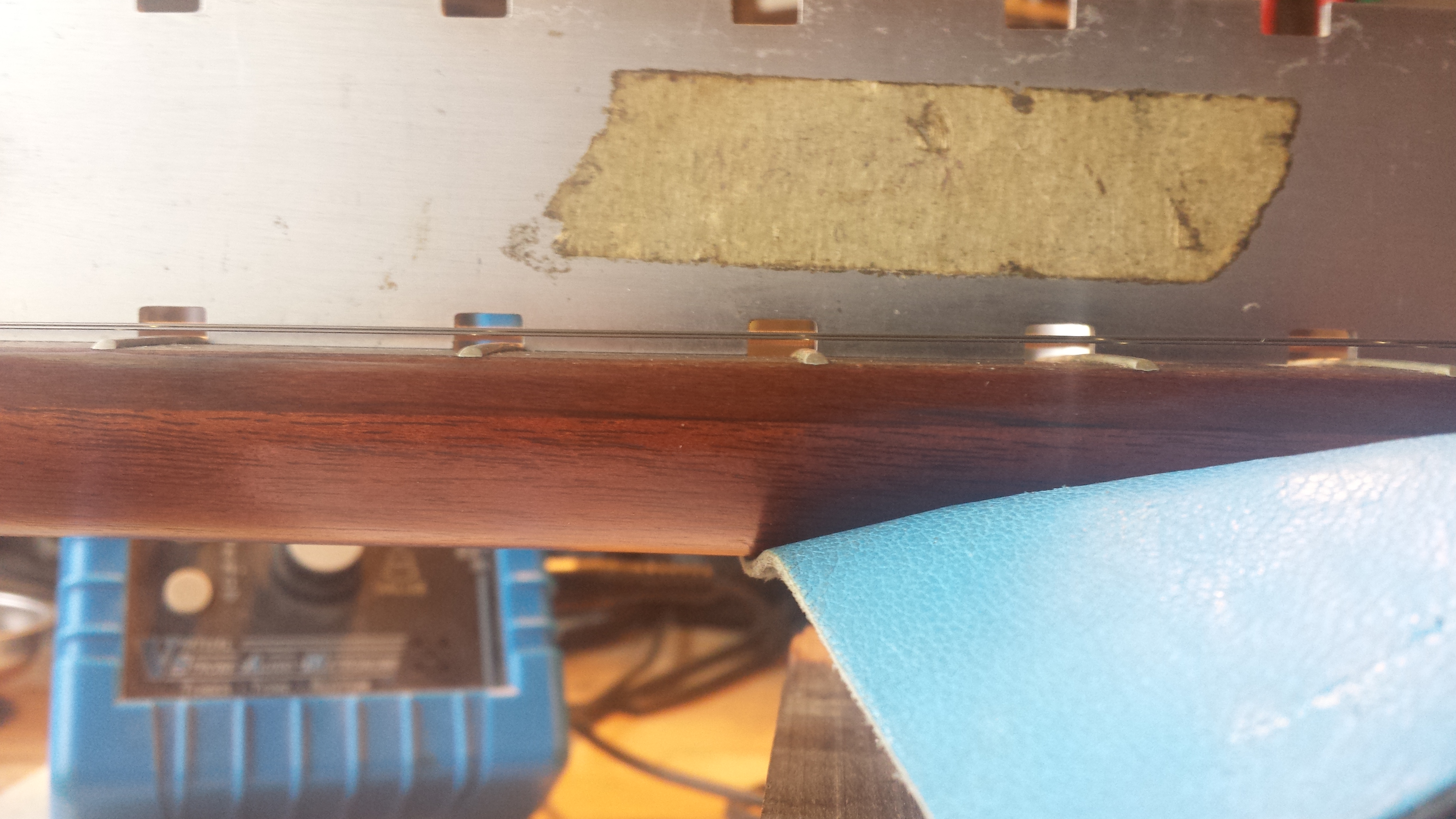 With the saddle shaved down by about 1/32, there’s still plenty of height above the bridge to give a good string break angle down to the bridge pins. This is important– too little saddle height above the bridge, and the guitar will start to lose power and projection, but too much and the leverage can break strings more easily, or even crack the bridge. If your saddle is at one extreme or another and you still can’t get the action you want, there could be a problem with your neck angle. 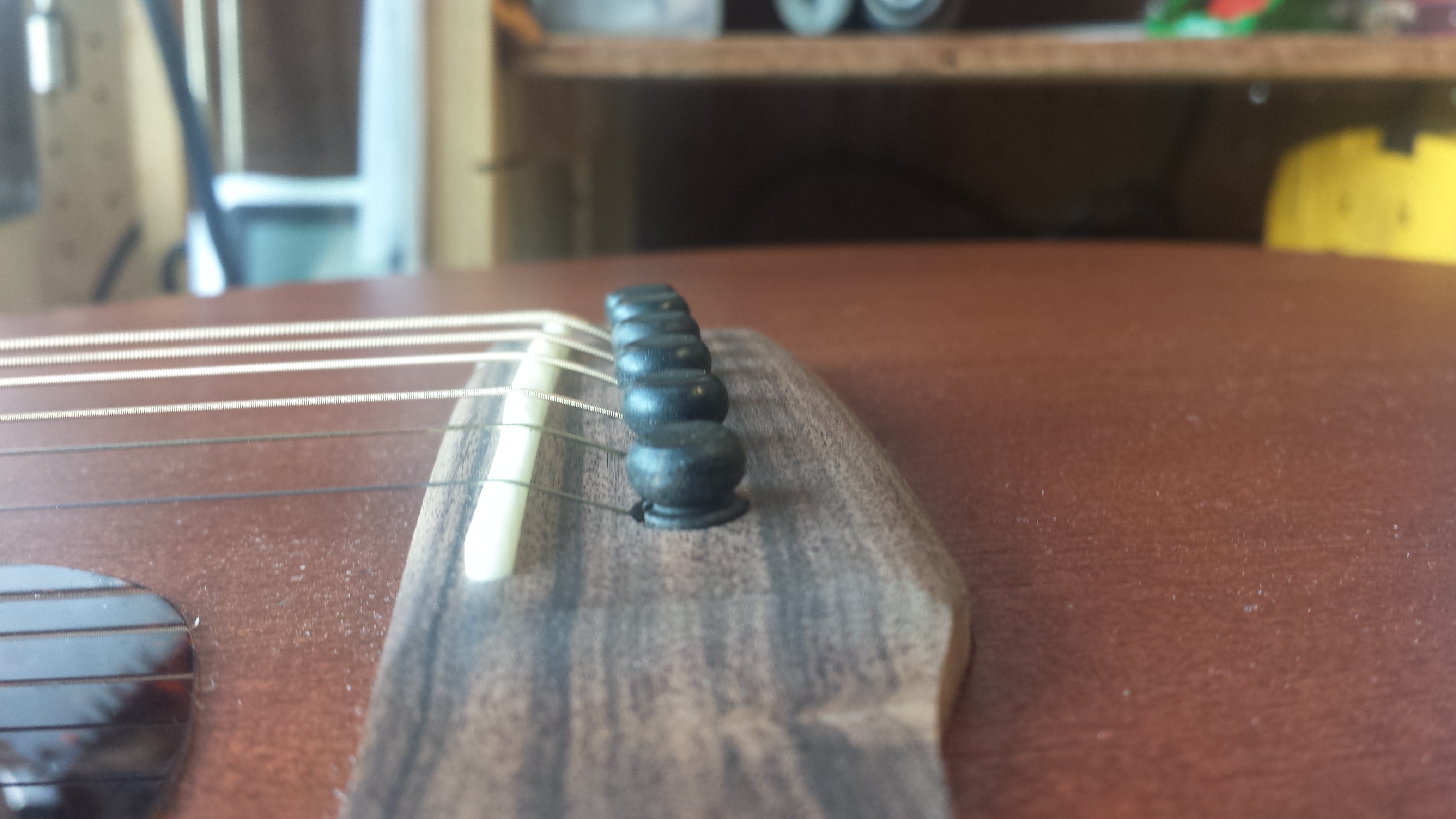 This is a perfectly acceptable saddle height, enough to give plenty of volume without causing other problems. Too much lower than this, and the guitar will start to sound a bit weak. 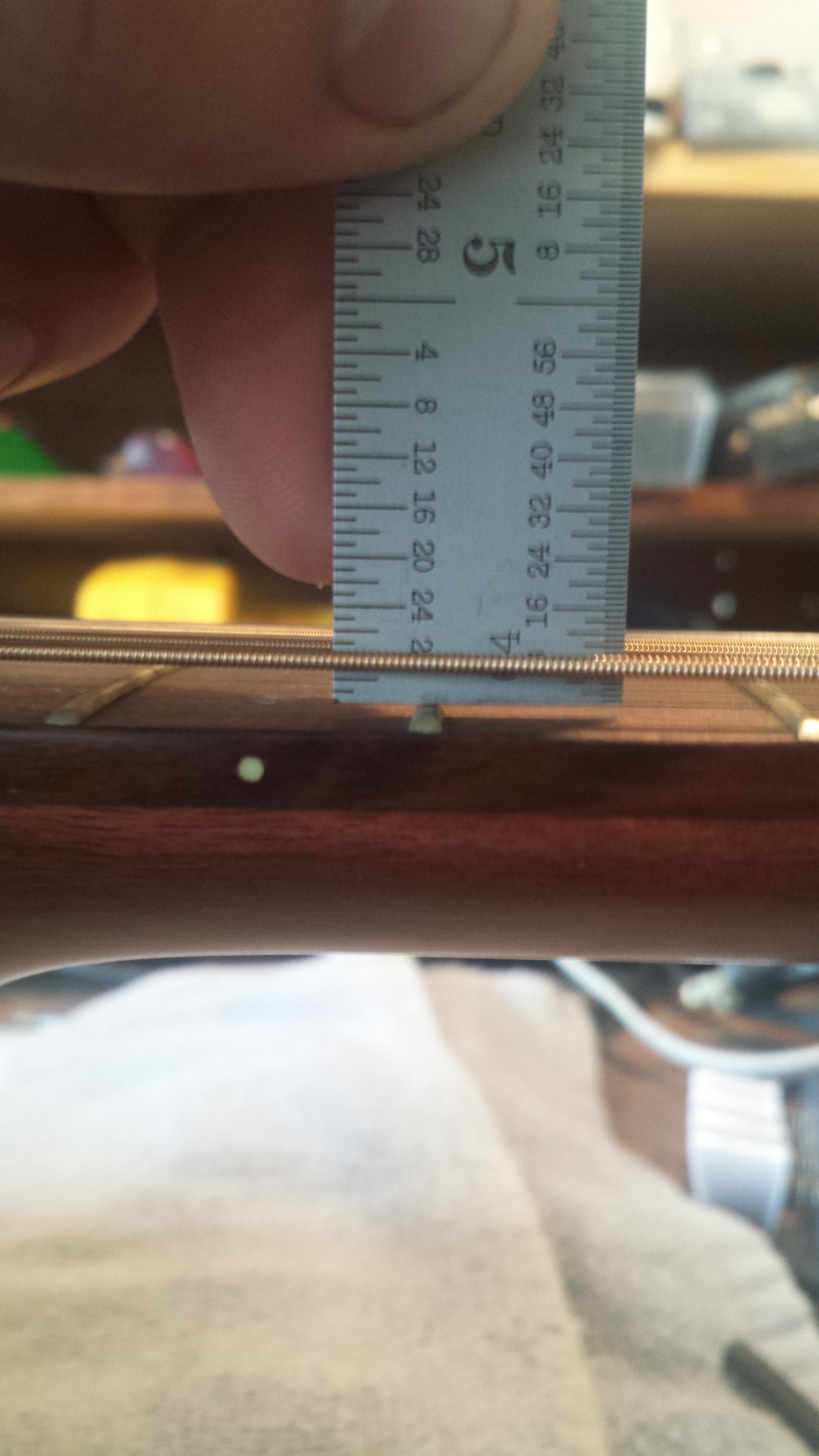 After the changes the action is at 3/32″ for the low E at the 12th fret, which should be comfortable for most players.

All said and done, the adjustments were pretty basic, but they make all the difference when under the microscope of the microphone in the studio! You can see why it’s a good idea to bring even a new guitar in for a quick tuneup. Guitars are dynamic, sensitive, and always changing based on their environment. Staying on top of seasonal maintenance will ensure that they are always as responsive and fun to play as possible. 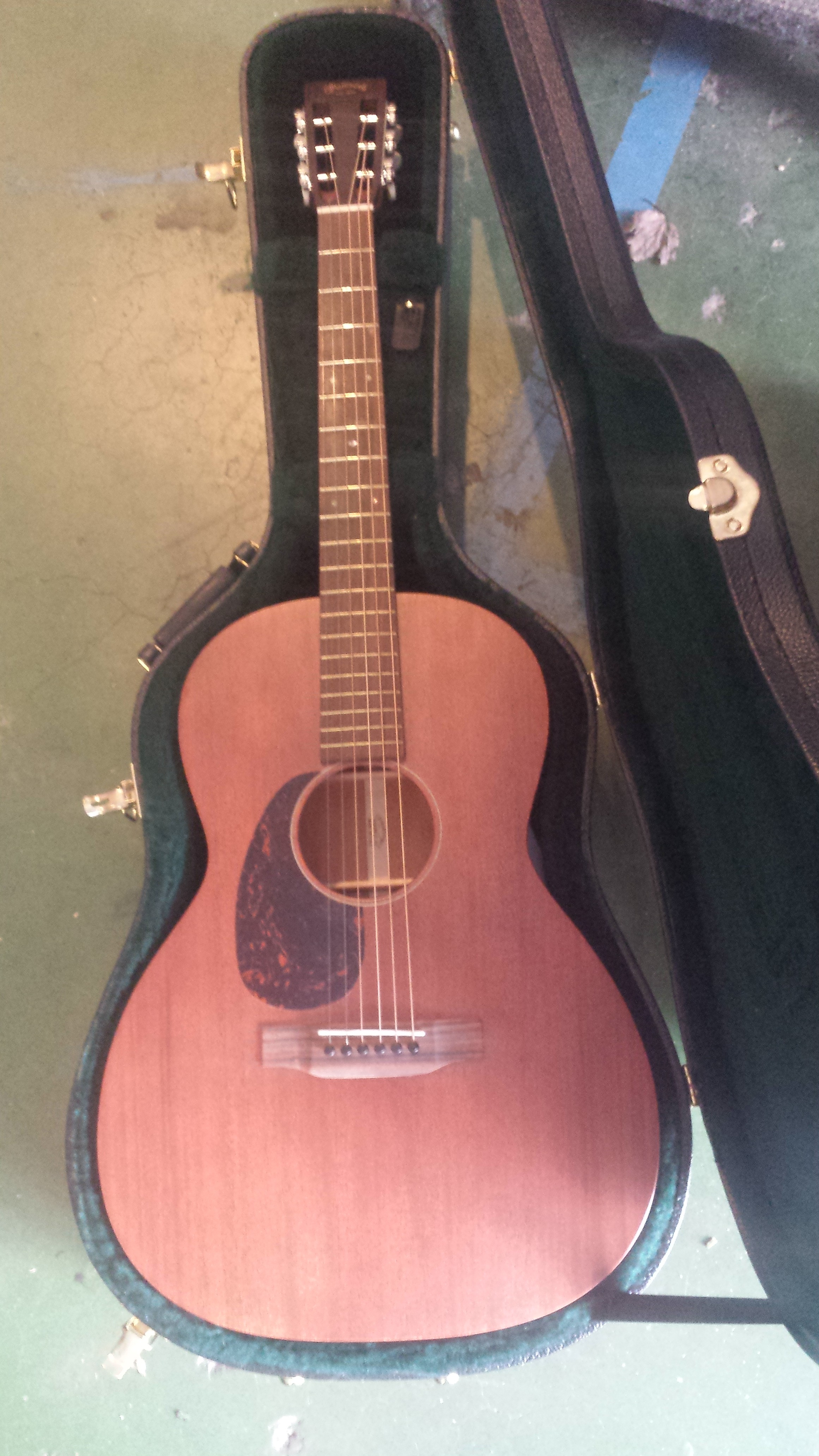 Back in the case and ready to roll!